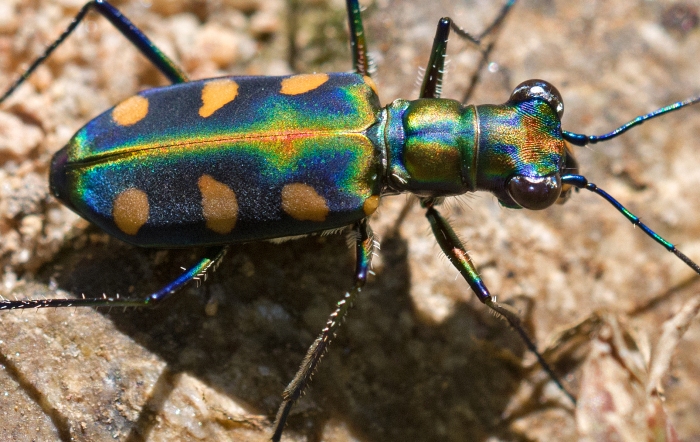 Tiger beetles (Cicindelinae) are strikingly beautiful predatory insects which come in a bewildering variety of stunning colours: iridescent, metallic greens, reds, blues and so on. Researchers have speculated about the function of these gorgeous colours and have come up with theories to do with crypsis (blending in), disruption by iridescence (dazzle!), mimicry (trying to look like something else), and thermoregulation (regulating their body temperature). For example, the iridescent colours of some species might be acting as an aposematic or warning coloration; a message to other would be predators that they are highly distasteful (some tiger beetles produce cyanide!) and best avoided!

The colours themselves are structural in nature, meaning that they and are caused by a specific cuticular morphology (Schultz & Rankin 1985a, b). In other words, the elytra of many cicindeline species are covered with an array of closely packed, minute dimples (also called punctae). The reflecting layers within the punctae reflect shorter wavelengths of light and in the words of one researcher: 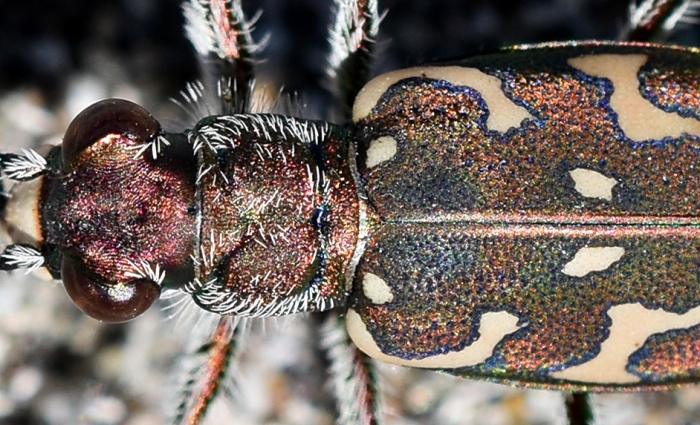 Tiger beetles are fast movers, perhaps the fastest of all ground-based insects. For example, although the Australian tiger beetle, Cicindela eburneola, was found to have an absolute speed of only 1.86 m/s (or 4.16 mph), its relative speed was 171 body lengths per second (bl/s). Using speed relative to size, is a much more accurate way of comparing the relative speeds of animals of greatly contrasting dimensions. Using this measure, Usain Bolt, only has a relative speed of about six bl/s (27.3mph), and even a cheetah only manages around 16 bl/s (75 mph). Other researchers have found that tiger beetles move so fast when chasing prey that they effectively go blind! Their brain just cannot keep up! 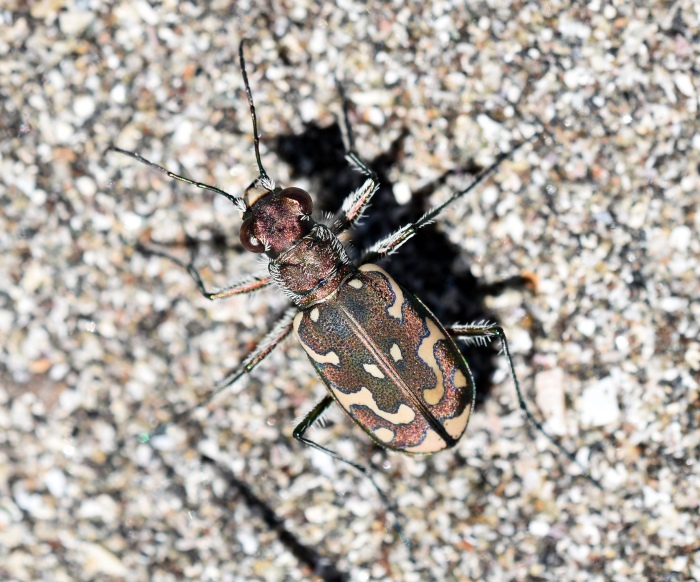 Tiger beetles move fast to catch prey, and they are ferocious predators of a host of other insects, but their sprinting ability may also help them to evade capture from their own predators. Robber flies are known to prey on tiger beetles. For example, the fearsome looking Hornet robberfly, Asilus crabroniformis (below), feeds on a variety of beetles and flies. Tiger beetles can also fly of course, typically making short flights and landing again; according to tiger beetle expert  David L. Pearson, this is how these killer flies catch them, on the wing (Pearson, D. L., & Vogler, A. P. (2001). Here’s a picture of another robber fly with a captured tiger beetle. 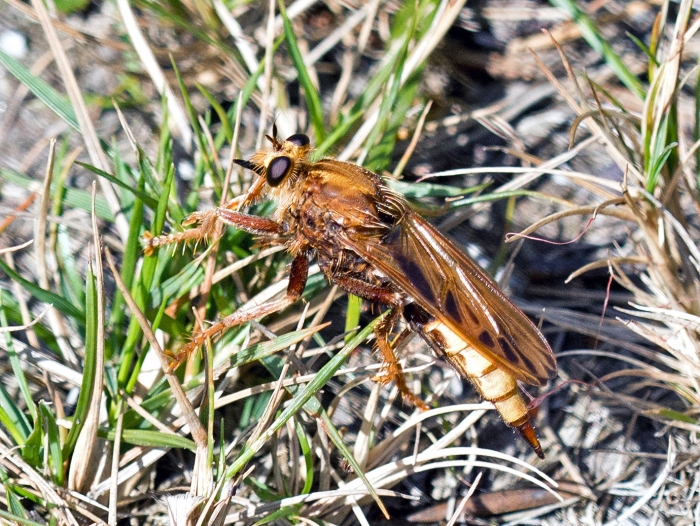 The great Victorian biologist – an co-discoverer with Charles Darwin of the theory of evolution by natural selection – Alfred Russel Wallace, was fascinated with Tiger beetles and he came across and collected many species during his travels in the Malay Archipelago (Indonesia). He remarked on how their colour adaptation to their environment afforded them protection (against predation):

The beautiful Cicindela gloriosa, of a very deep velvety green colour, was only taken upon wet mossy stones in the bed of a mountain stream, where it was with the greatest difficulty detected. A large brown species (C. heros) was found chiefly on dead leaves in forest paths; and one which was never seen except on the wet mud of salt marshes was of a glossy olive so exactly the colour of the mud as only to be distinguished, when the sun shone, by its shadow! Where the sandy beach was coralline and nearly white, I found a very pale Cicindela; wherever it was volcanic and black, a dark species of the same genus was sure to be met with. (Wallace, 1891). 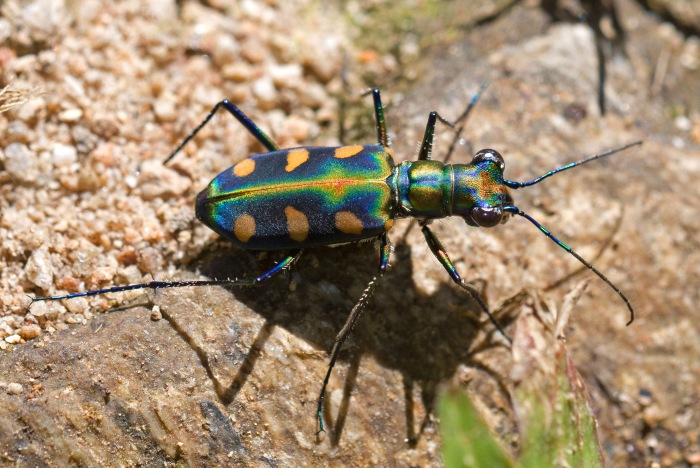 This fascination with how tiger beetles seem to match the colour of the substrate (mud, sand etc.) on which they occurred, led one biographer (John van Wyhe, 2013) of A W Wallace to speculate that this may have been the spark – in the same manner as Darwin’s finches – that led him to come up with his own theory of evolution by natural selection. Other Wallace scholars have however, dismissed this idea –  that cryptic colouration in tiger beetles led Wallace to natural selection – as ‘doubtful and unsubstantiated‘. 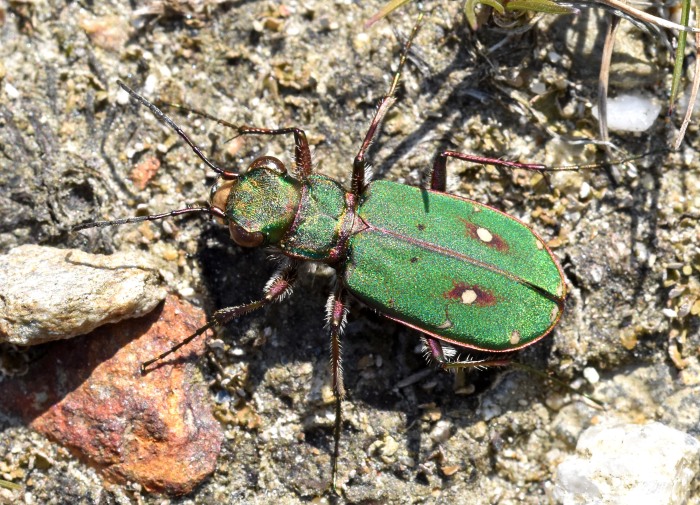 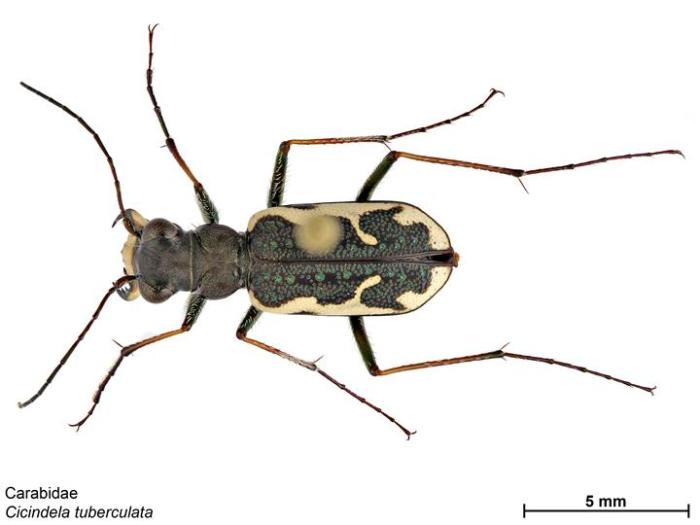 There’s an awful lot more that could be written about tiger beetles. New species continue to be discovered and there are at least 2,800 species worldwide (five in the UK); their bright colours and fascinating behaviour make them interesting subjects for observation and research. I can’t wait to see more of them!

5 thoughts on “Tiger beetles: colour for a purpose”