The Beautiful Demoiselle (Calopteryx virgo meridionalis)  is a European damselfy which likes small, fast flowing streams and rivers.  The female has a metallic greenish-bronze body and brown or russet coloured wings.  The male is even more striking with a metallic blueish-green body and blue wings.  The males were much more flighty than the females when I took these photographs, and frustratingly I did not manage to capture a shot of one.  I came across this damsel in Spain near the beautiful Rio Sor, which flows northwards into the sea in the Province of Galicia.

At one particular point, called the Mirador (view-point) Agua Caida – quite a remote spot at the end of a small country road – there is a steep track leading down to the river.

There were quite a few damsels resting on vegetation such as ferns as I neared the valley bottom. 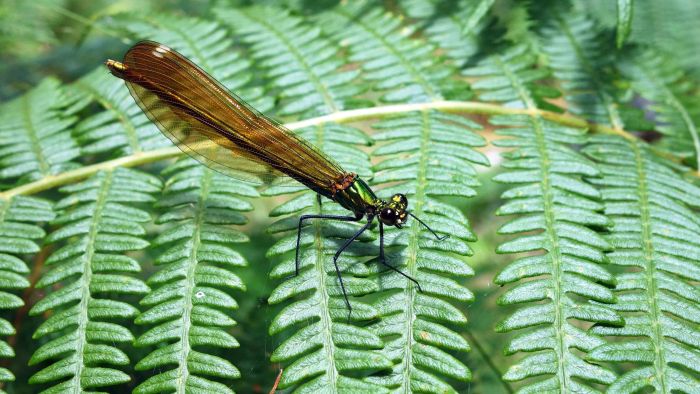 This is a beautiful and isolated spot.  I am the only person I have ever seen climb down and back (!) so it feels rather magical and unspoilt when you get to the river at the bottom of the valley, although it is possible to walk in along the river from one direction on an old path (it is a walking path).

The fast flowing Rio Sor below the Mirador Agua Caida

I must confess that I was not completely sure about this identification at first!  There is another similar species called Copper Demoiselle (Calopteryx haemorrhoidalis) and a subspecies called C. h. asturica occurs along the north Atlantic coast of Spain (1). Someone has kindly posted a photograph of both of the females of these two species – on the same leaf! – on Flicker (2) for comparison.  One of the distinguishing features of the Copper Demoiselle, is a dark band which runs through the female’s hind wing tips and which is clearly visible when she folds her wings together (3).   None of my female damsels have any sign of this band, although it is not present in immature females.  Finally, I confirmed the identification when I came across an excellent paper by Outomuro et al. (2010) (1).  This paper has an excellent illustration of the wings of the three different  Calopteryx species in the area, as well as a distributional map, which showed that it had to be C. virgo meridionalis which they describe as occurring in cold, fast-flowing streams and rivers, with
abundant waterside vegetation, such as this site.

One thought on “A beautiful damsel in a lovely spot!”