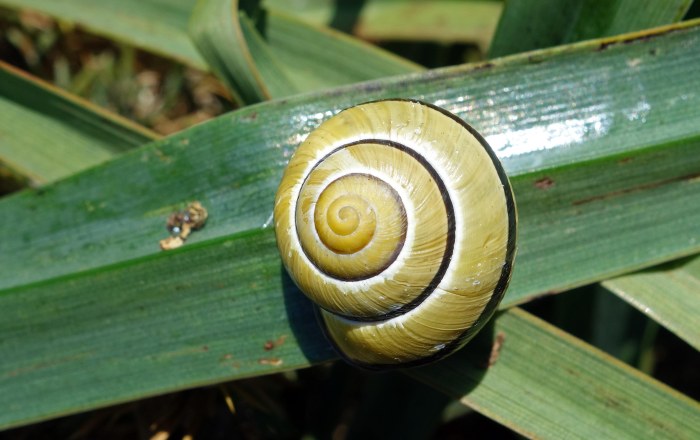 An enormous amount of work has been carried out over the years to try to understand the genetics of this little snail; the brown-lipped banded snail (Cepaea nemoralis). It has been called a model organism, and has been the subject of a huge citizen science project. So lets call it citizen snail! It is highly variable, and exists in a number of different forms, with different colours (yellow, pink and brown) and different numbers of dark bands (none, one or many). Researchers have tried to understand what influences the distribution of these polymorphisms. For example, are they determined by selection pressure (such as predation by thrushes), changes in the environment like temperature, or just genetic drift. Drifting lazily from one form to the other as the lords of randomness decree!

Recently, this obliging little snail found itself the focus of a huge effort of citizen science, to see whether it had changed over the last 40-50 years as a result of climate change (1). The question was: have recent increases in temperature ‘favoured shell morphs with a higher albedo’ (1). In other words, if its getting hotter, will the snail adapt to have lighter coloured yellow shells which reflect back more of the sunlight they receive? A bit like changing to a lighter coloured umbrella!

Participants were instructed on: i) how to find (‘hunt for’) snails, ii) how to distinguish C. nemoralis from a closely related species (C. hortensis), and iii) how to separate adults from juveniles (2). In total, over half a million snails were sampled (1). They weren’t killed, they were all put back after being examined. The results of this Evolution MegaLab project were impressive, with nearly 3,000 new records on polymorphism obtained from 15 European countries (3). In the end, it turned out that ‘there was no general increase in the frequency of yellow shells’, perhaps because the snails can always slide off into the shade if they get too hot! But the work did show an increase in the frequency of banded shell forms, perhaps – it was speculated – because of ‘changing predation pressure by birds’ (1). So they might be the subject of another study to see what birds are eating them! Perhaps we should warn them to prepared for another snail hunt!

One thought on “Citizen snail”