Rock pipit (Anthus petrosus) adult resting on on one leg

Rock Pipits (Anthus petrosus) are a common sight amongst the rocks and concrete blocks bordering the sea on Marine Drive, Scarborough. Rock Pipits – which rarely breed more than 100m above sea level – clearly like to nest in clefts in and amongst these rocks, despite the large numbers of people and cars which move along the sea-front on Marine Drive. It is nevertheless, protected by a sea wall and the site offers them a source of food and nesting material in the grassy areas on the landward side of the Drive. I saw some individuals with caterpillars in their beaks, calling – presumably to their offspring – to come and get it! One very scruffy looking individual was seen on a number of days. Presumably this is a juvenile Rock Pipit?

The only picture I have of the spot on the rocks where these photographs were taken, is when a particularly dramatic storm front passed across the headland (on 5th July 2015). The pictures of the Rock Pipits are all taken on 24th July 2015. 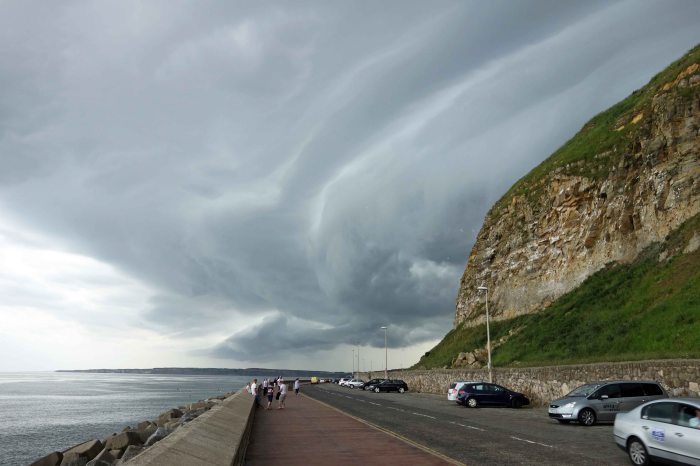 Compared to other pipits one might come across in the UK (Tree, Meadow), Rock Pipits have a fairly long, dark bill. The legs are said by some guides to be dark, but as will be seen from these photographs, they can look relatively pink in bright light.

There are two subspecies of Rock Pipit; the one that breeds in the British Isles (A. p. petrosus) shows little seasonal variation in plumage and most individuals exhibit heavily streaked underparts (1). Our Rock Pipits rarely show the pink tinge seen on the Scandinavian subspecies (A. p. littoralis) in the summer.

Rock Pipits largely largely resident in their local areas, but some movement does occur, particularly by juveniles. Individuals of the Scandinavian subspecies are known to fly westwards to Britain and over-winter on the coast in Norfolk, for example (2). Whether our Scarborough birds fly off anywhere, I have no idea.

One thing I soon noticed when taking these photographs, is that Rock Pipits like to stand on one leg! This individual certainly did, and was amazingly adept at moving one leg up under its feathers and imperceptibly shifting its weight onto the other leg. At first I thought it only had one leg! It did this so quickly!

A quick Google search revealed other pictures of one-legged Rock Pipits! (3) So clearly, they feel comfortable in this pose. It was not a cold day, so it is difficult to think that it is an adaptation to keep one leg warm! Perhaps they just like balancing on one leg and giving the other one a rest! 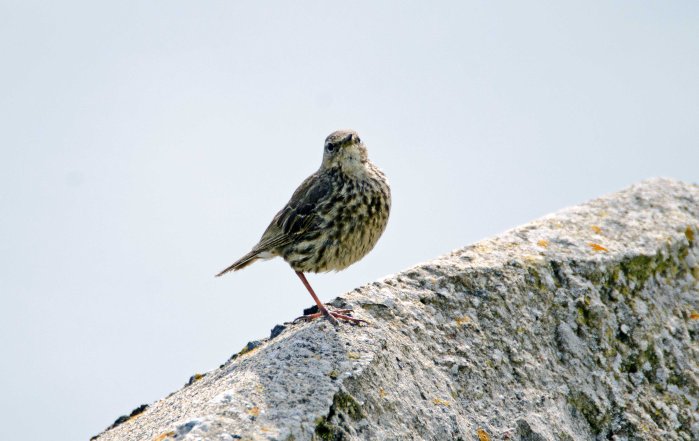 The sexes are impossible to separate based on plumage alone, so whether this was Rocky or Rocquette I don’t know!

3. The One Legged Rock Pipit Of Iona..

One thought on “Rocky the (one-legged!) Rock Pipit”