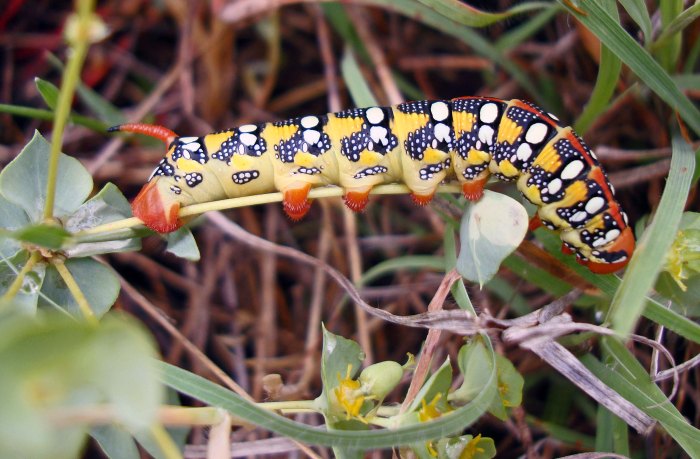 The caterpillars of this species – the Spurge Hawk-moth (Hyles euphorbiae) – are highly variable and there are many different subspecies; some of which are now regarded as separate species (1, 2). In fact, it seems to be a taxonomic nightmare! First of all, the Hyles genus itself comprises “a complex of species, subspecies and forms, all closely related to Hyles euphorbiae” (3). Secondly, the species complex called Hyles euphorbiae “is rather difficult to classify for it would seem to be in the process of diverging into a number of species” (3). Thirdly, some of the subspecies have crossed with each other to form localised hybrid populations in some parts of Europe!

The yellow, black and white larva (with orange prolegs!) shown here is probably Hyles euphorbiae euphorbiae, as it looks very similar to photographs of other larvae collected from the same area (Serres) in northern Greece (3). They feed on species of Euphorbia, which they consume with great gusto and if disturbed, eject “a thick stream of dark green fluid” said to be “rich in phorbol esters, which are potent toxins and irritants” (3). So you have been warned!

This complex of species and subspecies would seem to be a great opportunity to observe evolution in progress, and some researchers are doing just that (5, 6). The problem is that taxonomists have sometimes disagreed as to whether certain forms are completely different species, or just distinct subspecies.  Interestingly, and this is by no means unique in rapidly diverging species, the adult genitalia – features beloved by classical lepidopterists – are of “little use as they show practically no difference between taxa” (3). Fortunately, the colour and patterns of the larval stages do “provide a very good guide to the relationships between the many ‘species’ and ‘subspecies'”, although there is some overlap (5). This is analogous to a study which found ten cryptic species lurking within indistinguishable adults of a neotropical species (in Costa Rica) that did however, have distinctly different caterpillars (and feeding preferences) (4).

Molecular studies – using mitochondrial DNA sequences – are also coming to the rescue of the Hyles euphorbiae complex (HEC) (5). It seems that the different lineages within the HEC complex arose as a consequence of geographical isolation in Pleistocene refuges in Europe, during the Ice Ages (6). But there are unresolved issues concerning the separation of different forms, or haplotypes, using mitochondrial DNA (see reference 6 for a discussion).

2 thoughts on “A complex caterpillar!”