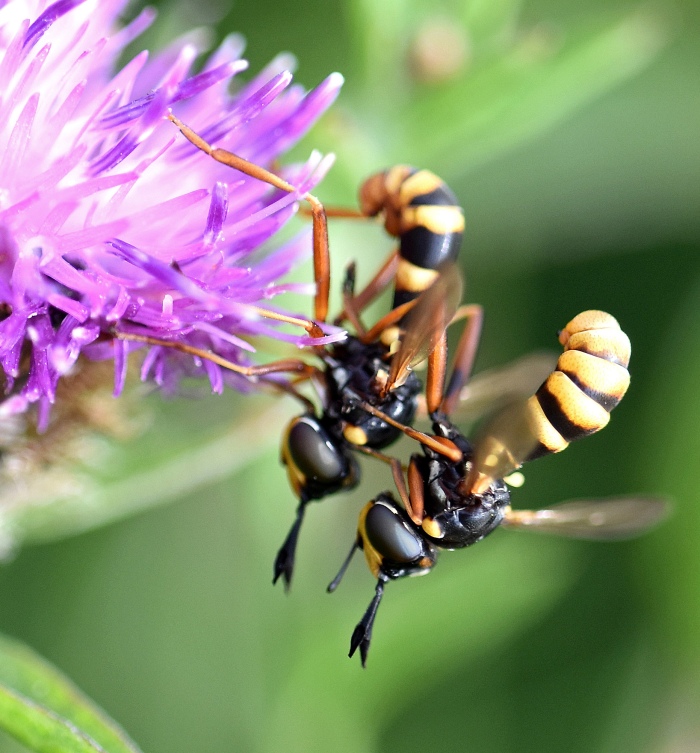 These remarkable flies, known as Thick-headed Flies (Conopidae), are larval parasitoids of bees and wasps. Females of this species, Conops quadrifasciatus, attack bumblebees in flight, which has earned them the name ‘bee-grabbers’. Apparently, they grab the poor bee, and use a specialised pad-like structure at the end of their abdomen (called a theca) to prise apart the bee and implant an egg within it, without ever touching the ground (Links 1, 2). The larvae then develops inside the bee and in many conopid species, commandeers the nervous system of the host, inducing it to bury itself in the ground, so that the parasite can remain there, comfortably waiting out the winter, until emerging as an adult the following year. There is a key paper by Clements, D. K. (1997), which unfortunately I have not been able to consult (need a trip to a real library, as it is not available online) (4). 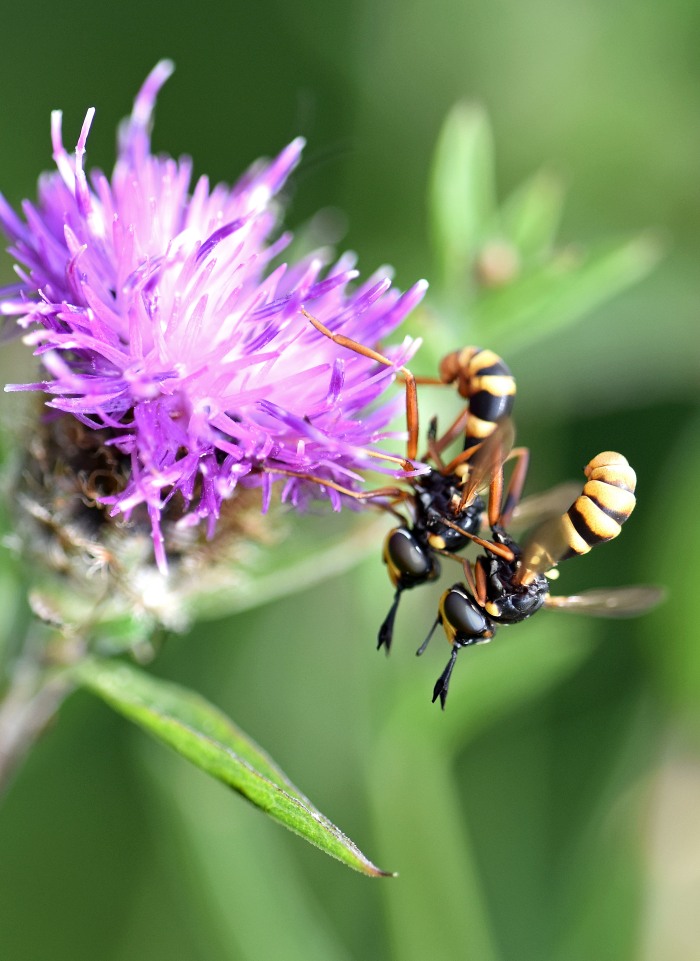 Another fascinating paper by Ken Preston‐Mafham (5), details the amazing ‘riding’ behaviour of the males: ‘Males of Conops quadrifasciata “claim” females in late morning and then spend the rest of the day exposed as “riders” to attacks by other males. Male riders can respond to an attack by performing an abdomen‐lift which denies the attacker access to the female’s genitalia.’ 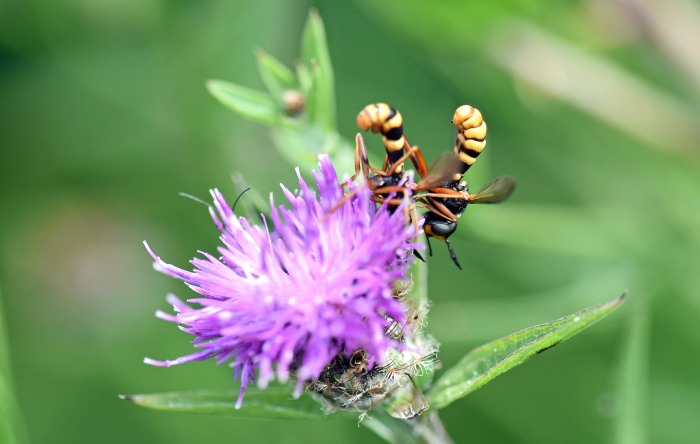 Conopids of this species, Conops quadrifasciatus, have been reported as parasitizing the red tailed bumblebee, Bombus lapidarius. I took a photo of one doing a bit of sun-bathing! (below). Perhaps it was taking a break from collecting nectar and pollen. 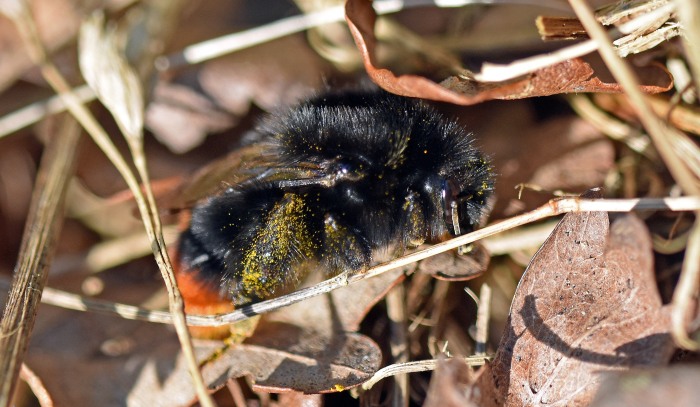 Bombus lapidarius, the Red tailed bumblebee queen. Resting on the ground or searching for the net entrance?

Next time you see a bumblebee, spare a thought for them having to run the gauntlet of these fierce bee-grabbing flies! Perhaps there are ways of avoiding being parasitised? Is it the slow-flying or sick bees that get caught? As usual in nature, there is so much that we don’t see or know about. We just get a glimpse into their world, and are are left to wonder what it must be like to an insect. How the system stays in balance, and how bee vs. fly contests evolve over millennia, we can only speculate about. 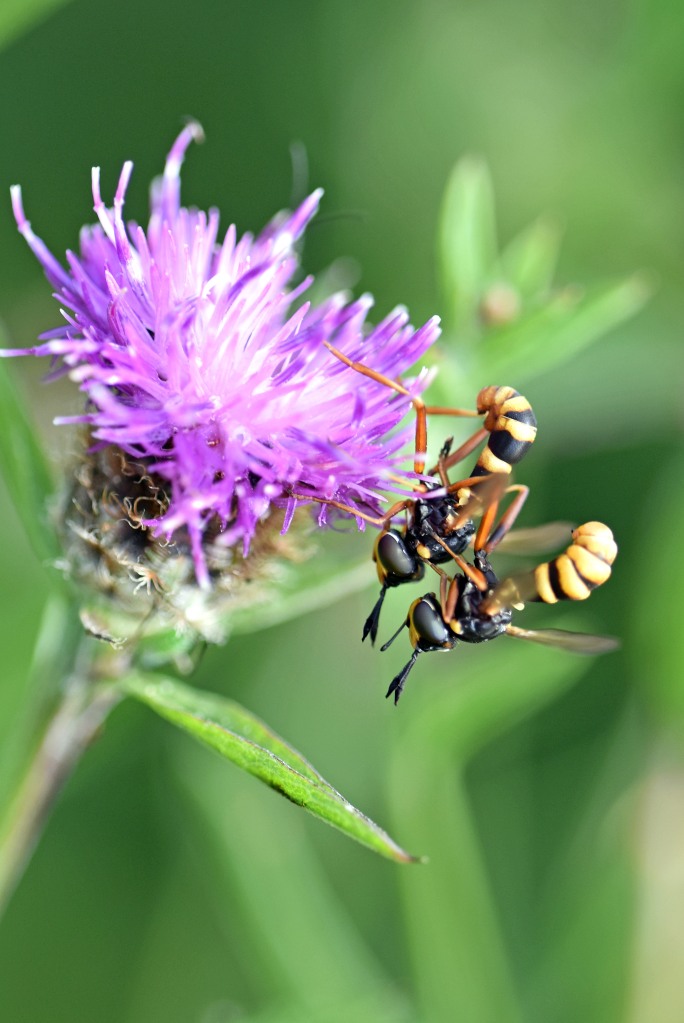 Quite why these flies need to be wasp mimics – they certainly look rather like wasps – I am not sure. Is it to fool the bees? I don’t think so. Or is it to avoid predation? Perhaps from birds?

For a truly wonderful set of photographs of this species, see the Flicker site of Steven Falk, a professional photographer and author (3).

These photos were taken on 7th July 2017 at Felmersham gravel pits, a nature reserve on the Great Ouse, in Bedfordshore (6).