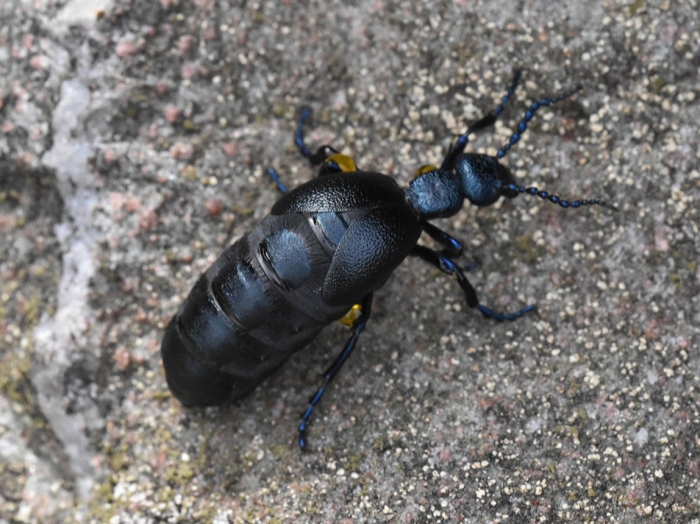 I came across this big blister beetle today. It was walking though the grass near the top of a local look out point called Mirador da Miranda, above the town of Carino, in Galicia, NW Spain. It is a good site for lizards as well as many hilltopping butterflies. I picked it up and put it on a rock to photograph, but it kept moving and trying to escape.

Oil beetles such as this produce oily droplets containing cantharadin, a toxin which is secreted by the male and given to the female as a copulatory gift during mating. Apparently she uses it to protect the eggs from predators.

This individual produced some liquid but it did not have a noxious smell so maybe she was a female. I am guessing that this is Meloe proscarabaeus, but there are other similar species, including Meloe violaceus, the violet oil beetle. These beetles have an extraordinary life cycle with tenacious little parasitic larvae that attach themselves to solitary bees and return to their nests. There they feed on the bee’s eggs and the pollen and nectar.

This was the first blog I managed to write using my mobile phone!😄

One thought on “Big blistering beetle”