The subject of reduced or modified forelegs in butterflies might strike some people as being rather obscure, but it is – as I hope to demonstrate – a fascinating tale of evolution and adaptation. In addition, there is an awful lot of basic biology and behaviour which is not fully understood in many of our common butterflies in the United Kingdom and Europe. The extent to which the forelegs (prothoracic, or T1 legs) of butterflies are reduced in size in different species – and also how they differ between the sexes – has traditionally been something which taxonomists got interested in. For example, they have used it to classify butterflies into different families. Butterflies probably started out, in the dim and distant past, with six equally sized legs, but over time the front pair of legs have been reduced or miniaturized in some families, and in many cases their function has changed from that of walking, to that of chemoreception and mechanoreception. In other words, the front legs evolved, and were co-opted into a different use: that of sensing, or detecting different stimuli: touch and taste for example. And it is likely that some of these reductions occurred independently (convergent evolution) over time (Wolfe et al., 2011).

As is commonly known, brush-footed butterflies (Nymphalidae) only have four (two pairs) of fully functional legs; the forelegs are markedly reduced – or even vestigial – and are not used for walking or perching. The forelegs are highly reduced and vestigial in many common temperate species, like the Painted lady (Vanessa cardui) and the Red admiral (Vanessa atalanta) for example. The tiny little appendages are covered in hairs and are pressed tightly against against the thorax (below). As far as I am aware they are not mobile?

In other nymphalids, like graylings (of many species), there are tiny little legs which hang down in front of the thorax. There is a good photograph of a Woodland Grayling (Hipparchia fagi) on the UK Butterflies website (Female Underside Photo © Roger Gibbons) which shows this nicely. I have also managed to capture photographs of Rock Graylings (below) where the forelegs are visible (below). The fact that they are not fixed against the body, suggests that they may be used by the butterflies, for example to ‘taste’ leaves by the female to see if they are suitable for laying eggs on. I am only guessing, based on what is known about Heliconius species (see below). 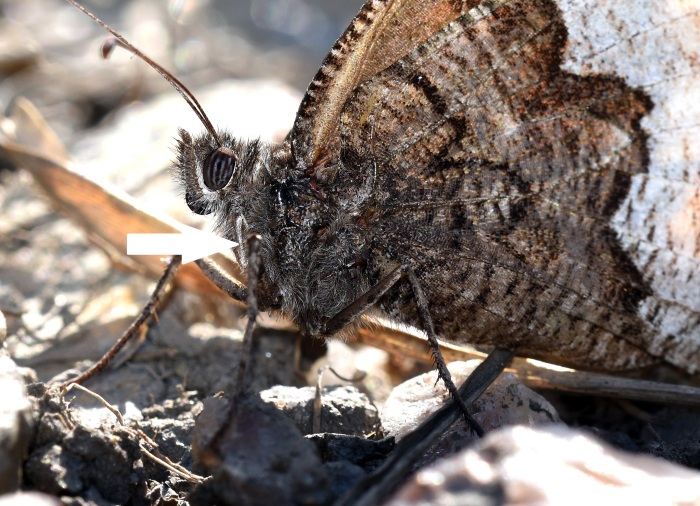 Females of Heliconius butterflies – such as Heliconius erato and H. melpomene (below) (Lepidoptera, Nymphalidae) – are well known for ‘tasting’ plant surfaces with their atrophied foretarsi, by ‘drumming’ on it (Bell, & Cardé, 2013). Females of other very different species, such as Pieris brassicae and P. rapae (Pieridae), for example, also carry out this drumming behaviour on leaf surfaces (Fox, 1966). This behaviour probably liberates plant saps, which the butterfly is able to taste using gustatory receptors (Briscoe et al., 2013), and thus, determine the chemical properties of the plant. In some Heliconius species, the male forelegs lack the chemosensory hairs needed to taste the plant, whilst female forelegs (the foretarsi again) have groups of special sensory hairs which they use to identify sugars and amino acids, as well as secondary plant compounds (Briscoe et al., 2013).

Some lycaenids (Lycaenidae), such as Miletus species in the sub-family Miletinae, also hold their forelegs closely – i.e. adpressed – against the body (see below).

The forelegs of the males can also be reduced in some lycaenid species, with the terminal claws absent (Robbins, 1988; Braby, 2016).  For example in Jalmenus evagoras, the imperial hairstreak (see below). 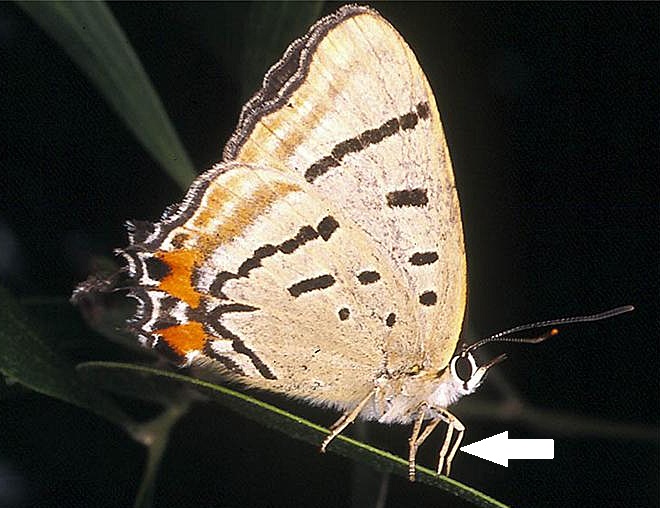 Riodinids (Riodinidae) are also unusual in that only females have a full complement (six) of fully developed legs! In males, the forelegs are largely absent, or reduced to non-functional, hairlike tufts (similar to nymphalids) according to an excellent blog on the Butterflies of Singapore website (The Butterfly Legs). Females tend to fold their forelegs up against the front of the thorax, and stand on the four ‘back’ legs (see below). But the forelegs look functional to me, and I would not be surprised to learn that they are covered in ‘taste hairs’ just like Heliconious butterflies? There is so much that could be found out about the function of these appendages using modern techniques, e.g. to identify chemoreceptors. 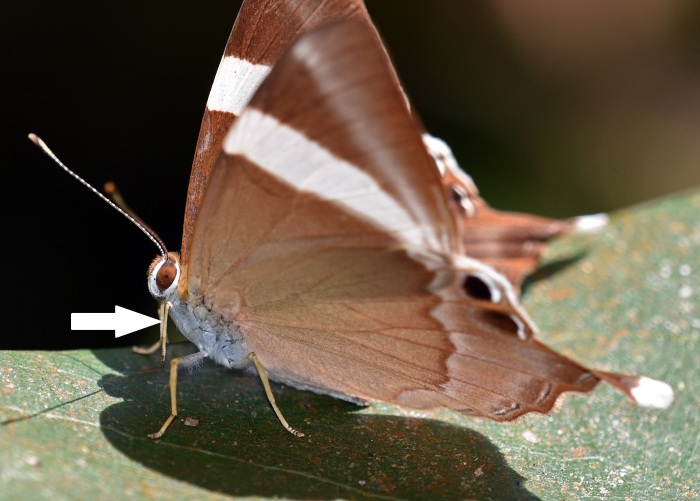 In skippers (Hesperiidae), the forelegs are only slightly reduced according to Fox (1966), and is not apparent from casual observation. As far as I am aware, all skippers are perfectly capable of using all six legs! Nevertheless, many skipper species perch on leaves with their forelegs held tucked against the body (below).

Quite why skippers sometimes perch with their forelegs held against the thorax (like a rabbit!) I have no idea? Perhaps it is an indication that the forelegs are used for different – sensory – purposes? Skippers are the oldest family of butterflies, evolutionary speaking, so presumably there has been little morphological specialization. But might they have evolved some of the sensory structures seen on other butterflies?

Finally, I am sure that there is much more to this subject than I am aware of. Some of the academic literature is very old and difficult to obtain. If any readers have any observations, particularly on the behaviour and use of reduced forelegs (the front legs!) in butterflies, I would be delighted to hear from you.

Robbins, R. K. (1988). Male foretarsal variation in Lycaenidae and Riodinidae, and the systematic placement of Styx infernalis (Lepidoptera). Proceedings of the entomological Society of Washington.

3 thoughts on “Forelegs and four legs in butterflies!”