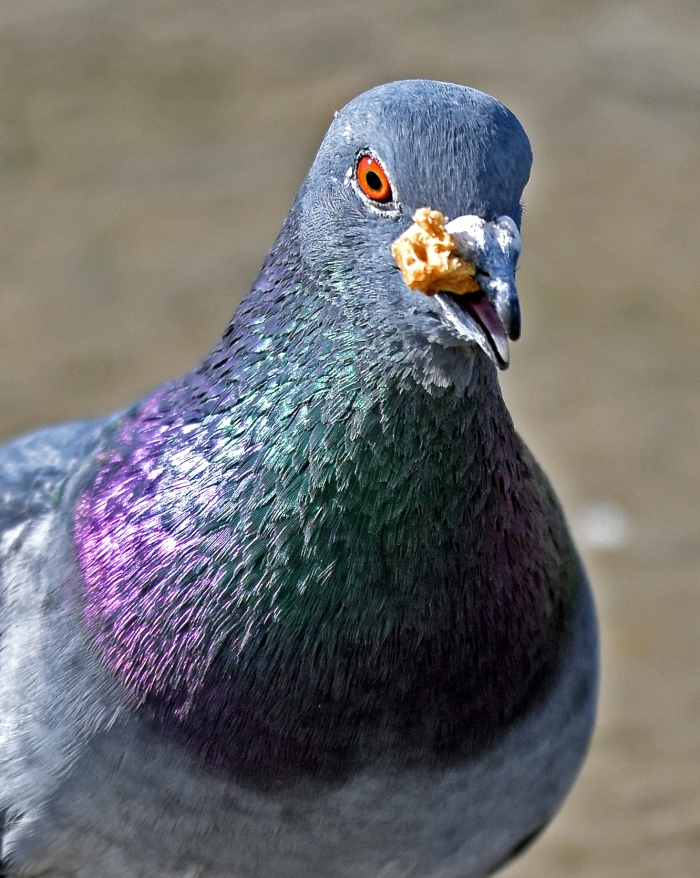 Rock doves, or common pigeons (Columba livia), like those shown here have iridescent green and purple feathers around their necks. Both males and females show these iridescent colours, although females tend to have less iridescence than males. Iridescence means that the colours change according to the angle of view (or angle of illumination). So as the pigeon moves about in the sunshine, the green and purple colours on its neck feathers can change suddenly, as viewing angle shifts. 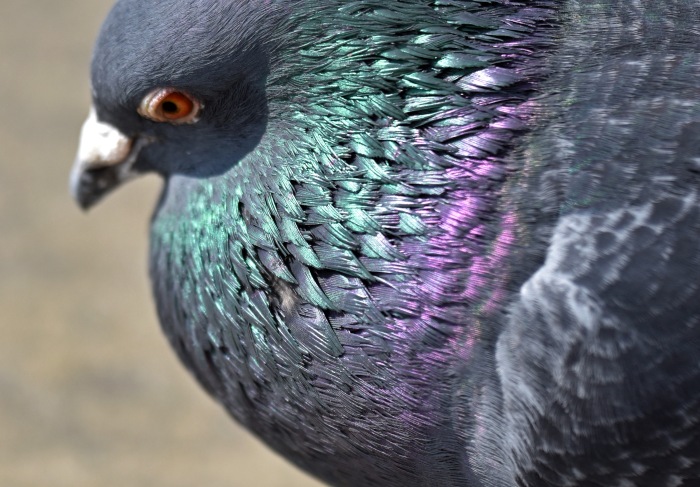 The green neck feathers change in colour to purple; whilst the purple feathers change to green. Only a small change in the viewing angle is needed. These iridescent colours on pigeons are structural colours, i.e. produced by physical optical effects. In this case, due to numerous tiny barbules – about 350µm in length, 40µm in width and 3µm thick – a two-color iridescence is produced: called thin-film interference. The same effect occurs in a soap bubble. 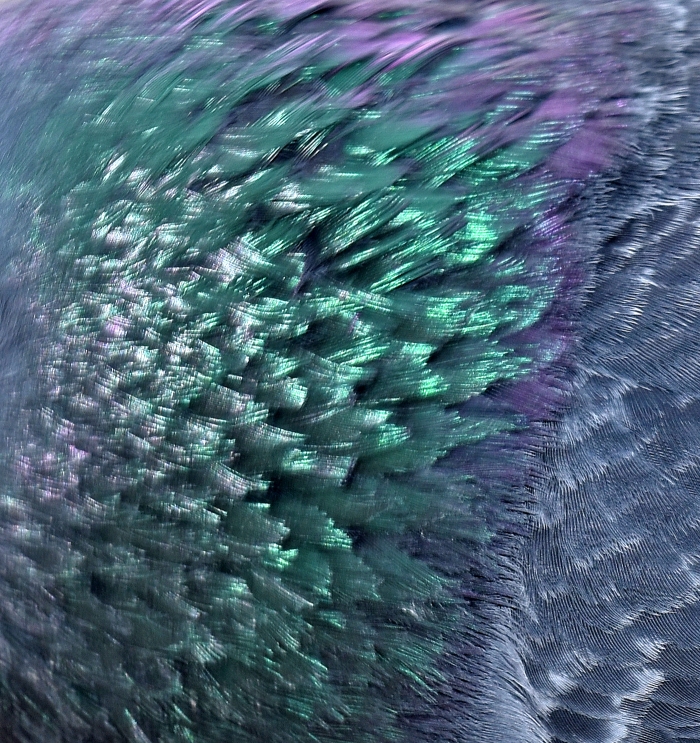 The barbules are crescent-shaped (below) and produce a very broad reflection pattern under light illumination. When the viewing angle is small relative to the feather surface, green light is reflected off the surface of barbules, but when the angle is large, purple light is reflected from barbules. Both green and purple barbules are composed of an outer keratin layer which differs in thickness between the green and purple barbules. 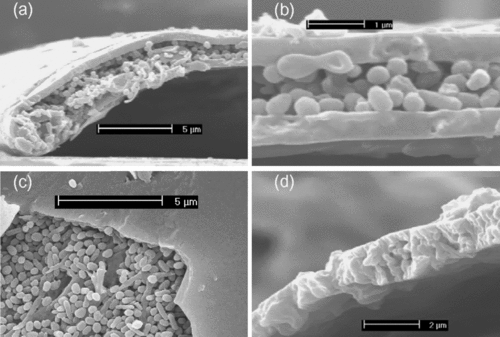 It has been known for some time that birds can see ultraviolet (UV) light; which means that they see the world – and themselves in particular – differently from how we do. The have tetrachromic colour vision, meaning that they have four types of cone photoreceptors: red, green, blue and UV. We humans lack the UV receptors of course. 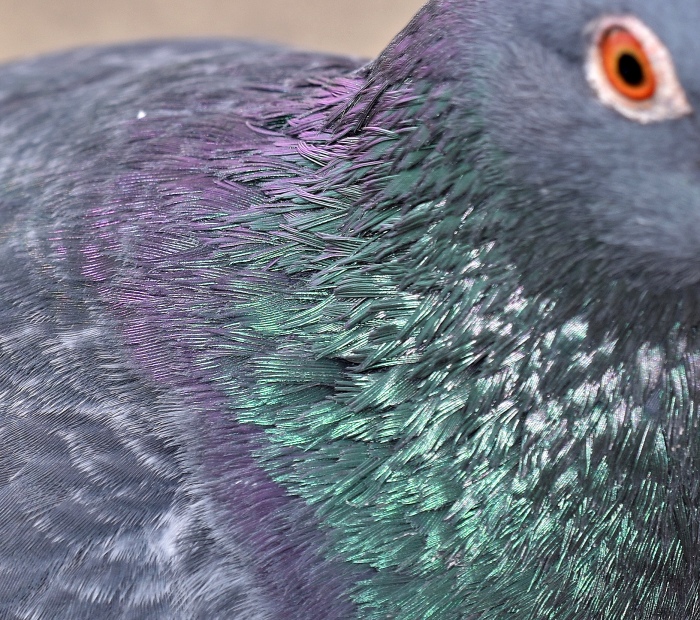 Green barbules vary in colour from green to purple with the observing angle changed from normal to oblique, while purple barbules from purple to green in an opposite way (Yin et al., 2006). 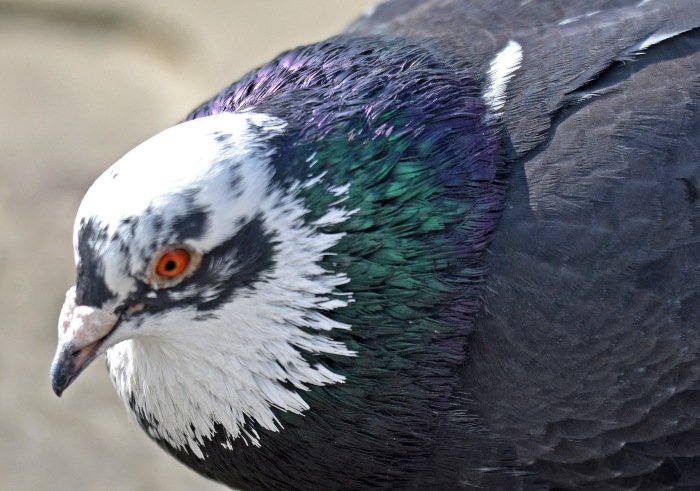 It is actually a bit more complicated, because the green and purple colours we see are composed of different primary and secondary colours (or reflectance peaks):

Neck feathers that appear purple to the human eye exhibit four reflectance peaks— two in the UV and one in the blue and red regions—and thus exhibit a UV-purple hue. Neck feathers that appear green to the human eye are characterized by five spectral peaks: two in the UV (UVA and UVB), a predominant green peak, and secondary violet and red peaks, conferring a UV-purple-green color” McGraw, K. J. (2004)

This researcher thinks that such elaborate UV coloration suggests that birds may be using complex and ‘hidden’ UV signaling systems (McGraw, 2004). There is certainly a lot more to find out about how these common birds, so familiar to us, are using these colours to communicate amongst themselves; in ways that may be invisible to us. I like that thought. And we thought that they were just pigeons! 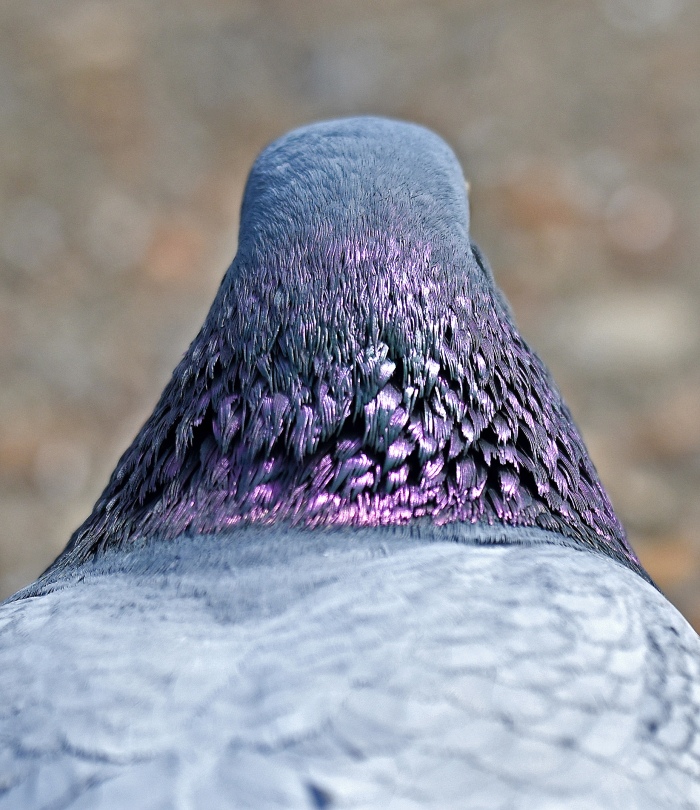