We mammals are quite fortunate in having bones! They reside inside us, and our skeleton grows as we grow. Insects on the other hand, have an external skeleton, or exoskeleton, and must shed it periodically, as they enlarge in size. The insect cuticle is secreted by a single layer of epidermal cells that covers the entire surface of the insect, extending deep into their tracheal system, fore- and hindgut. It is composed of several layers. Passing inwards from the outside they are: cement and wax, then epicuticle, then exocuticle and endocuticle (below). 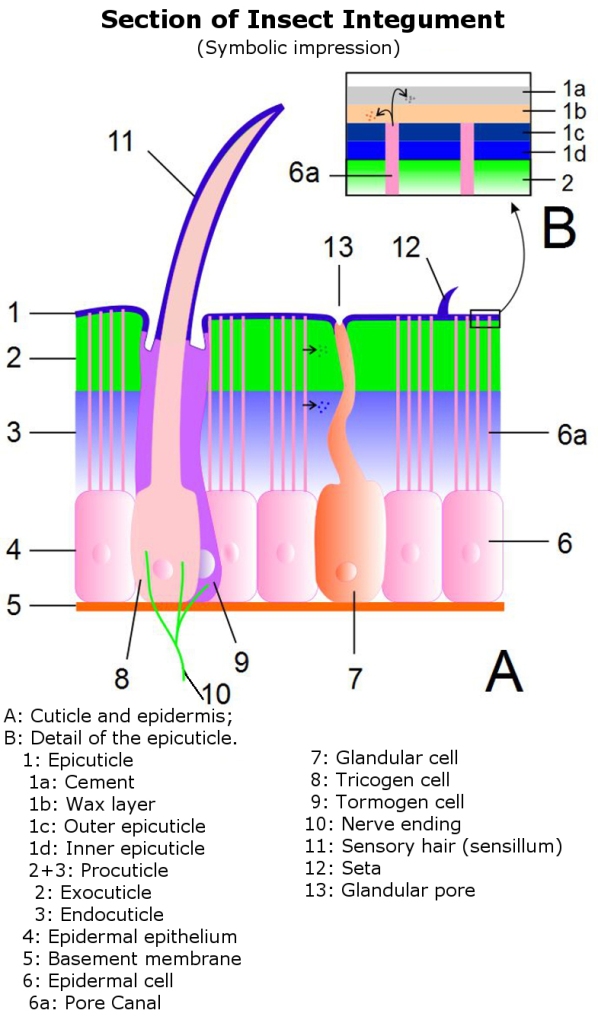 Insect cuticles can be thick or thin, and hard or soft. Think of the thick, hard shell of a beetle (below) or the thin flexible integument of a caterpillar. Cuticles can vary in thickness from 1 to 200 μm (microns). 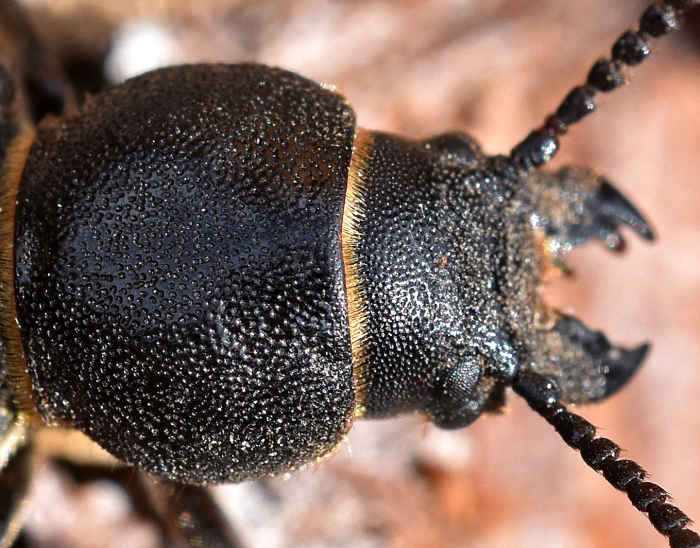 Insect cuticle is a composite material, consisting of arrangements of highly crystalline chitin nanofibres embedded in a matrix of proteins. Soft, or compliant cuticles – like that in caterpillars (below) – commonly contain equal amounts of chitin and protein, and 40 to 75% water. Whereas, hard, stiff cuticles contain 15 to 30% chitin (dry weight) and only 12% water.

The outermost layer, or epicuticle, consists mostly of a hardened protein, but also contains waxes – cuticular hydrocarbons – which function to reduce water loss, as well as an outer ‘cement layer’. These long chain hydrocarbons also convey a wealth of information about the insect: its age, sex and genetic quality. The thicker exocuticle consists mainly of chitin and proteins, which are ‘tanned’ and hardened to form sclerotin, in a process called sclerotisation. This gives the cuticle its rigidity. Finally, the softer and more flexible endocuticle, which is usually the thickest layer, contains chitin and untanned proteins.

As insects grow in size, it regularly becomes necessary for them to get rid of their existing cuticle, which is constraining further growth, and produce a new one. The moulting process is called ecdysis, which usually occurs four or five times, but may occur as many as 50 or more times in some species! Cicadas (below) can have extremely long – up to 17+ years in some species – immature stages, spent underground, but usually only have five nymphal instars.

During moulting, as much as possible of the exocuticle is digested and reabsorbed through the epithelial layer. As the base of the old cuticle gets dissolved away, it starts to separate from the epidermis in a process called apolysis. The epithelial cells release enzymes which digest the endocuticle and much of the old material is re-used to form a new cuticle. During moulting, what remains of the exocuticle is shed and discarded; leaving and empty shell, the exuviae.  To get rid of the exoskeleton, the insect expands its body via an increase of blood pressure and/or the intake of air, and the outer shell is split. The insect then has to extract its body, and every appendage – including its antennae and legs – out of the old skin. Caterpillars may have very long hairs that need to be extracted! See below.

On moulting, the soft, new cuticle is expanded to accommodate further growth. Sclerotization and pigmentation then occur to produce the hard, functional exoskeleton than the insect needs. The insect must swell and expand the new cuticle, whilst it is still soft and pliable, so it is large enough to allow room for more growth. In the early stages of the development of the cuticle, before the insect has shed the skin of its previous stage, the amount of protein per unit chitin is much less than in the mature developed cuticle.

“The cuticle is, praeternaturally, multifunctional: it not only supports the insect, it gives it its shape, means of locomotion, waterproofing and a range of localised mechanical specialisations such as high compliance, adhesion, wear resistance and diffusion control.” (Vincent & Wegst, 2004).

Moth and butterfly larvae usually moult four or five times before they become an adult. Adult insects do not moult; they have to make do with the size and shape attained during their development. Mayflies are the only group of insects in which there is usually another molt after a functionally winged stage is attained. The so-called subimaginal stage (the dun) represents a true instar, the last stage before it moults into an adult (below). Amazingly, mayflies can moult 14 to 50 times!

Clint Penick of the North Carolina Museum of Natural Sciences, studied the ecology and evolution of social insects with a focus on the function of ant cuticle patterns as it relates to disease resistance. The beautiful patterns of the cuticle on the ant’s heads are shown below. (below). He then took this further and collaborated with a fabric designer  to produce ant cuticle themed cushions!

Inset cuticle is a amazing natural material which has served them well for hundreds of millions of years. Although like all arthropods, insects are slightly constrained by having to moult, there are some advantages of having your skeleton on the outside. Think of how many aliens and creatures in science fiction movies have exoskeletons! We humans have a wonderful internal skeleton, but we are rather soft and pudgy, and rather vulnerable on the outside!