I described in my first blog on butterfly eyespots (Conspicuousness or eye-mimicry?) how they can be effective at deterring predators from attacking them, although the jury is still out as to whether this happens because the eyespots are highly conspicuous, startling signals, or whether it is because they genuinely fool predators into thinking that they are looking at another predator. A big owl maybe? Like this upside-down Peacock butterfly (below).

In a second blog (Tinbergen and the Grayling), I described how butterflies like the Grayling, or even the Meadow brown perhaps (see below) use the so-called ‘startle’ response to defend themselves: i.e. the forewings are suddenly lifted, flicked upwards, to reveal the apical eyespot, or ocellus (below). Well it might work against a lizard or a small bird, even if it doesn’t frighten us large apes very much!

In this blog I want to look at butterfly wing spots that may have a different purpose; one of directing the attack – be it a peck, poke or bite! – towards the extremities of the animal: deflection. Of course eyespots could have dual, or even multiple functions, depending on who is receiving the signal, for example. Female butterflies of the same species may be impressed with the bright shiny scales within an eyespot (below), but to a predator they may just look like the pupil of an eye. I.e. ornamentation and mimicry working in parallel. 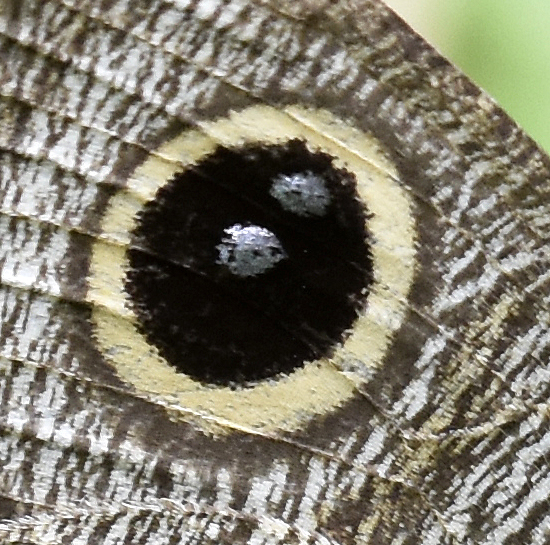 These little features in lepidopteran eyespots, are called ‘sparkles’ and are thought to mimic a natural corneal light reflection, or optical highlight: a twinkle, or sparkle in a vertebrate eye. Eyespots with ‘sparkles’ in a natural position were shown to have a stronger deterrent effect, suggesting that the better the eye mimicry, the more effective the deterrent effect of eyespots (Blut et al., 2012).

Butterflies usually look perfect from a distance, but if you photograph them and look closely, they often have bits of their wings missing! And the missing chunks often coincide with prominent spots, not necessarily perfect eyespots (although they are generally referred to as such), just brightly coloured circles or ovals towards the outer margins of the wings. See below.

Here is what the intact eyespots look like on a swallowtail butterfly (below). They are prominent and catch the attention of the eye; they are distracting for us and probably for vertebrate predators as well. The fact that they often get pecked is also pretty good evidence that they work; although it is only circumstantial evidence! Other parts of the wing also get pecked (find the peck mark in the image below!).

Papillionid (Swallowtail) butterflies of all kinds have these hind-wing eyespots, such as the Paris Peacock (Papilio paris) with red tornal eyespots and ‘tails’ (below).

Deflectory eyespots are usually thought to be smaller and less intimidating than, for example, the large eyespots seen on the centre of the wings of some butterflies. They are usually on the margins of the wings and there may be a series of them. The hindwing eyespots of this Speckled Wood (below) have been neatly pecked by something! A deflected stab, which will make little or no difference to the flying capability of the butterfly.

The eyespots on the Speckled wood are not so apparent on the underside of the hindwing, unless that is, a portion of the wing is missing, as in this individual shown below; another survivor!

The Dusky Diadem, Ethope himachala, has one of the finest arrays of marginal eyespots in the butterfly world, although this specimen I came across in northern India seemed to have avoided any pecking! Research has shown that multiple small marginal eyespots like this attract predators (indicating a deflective function perhaps), whereas single large (greater than 6 mm) eyespots intimidate predators (Ho et al., 2016).

One of the best examples I have come across of a butterfly with a prominent peck on a large eyespot, was this Palmking  (Amathusia phidippus palawanus) on the island of Palawan in the Philippines (below). There is some evidence to suggest that these deflection marks on butterfly wings are structurally, relatively weak, and have an increased tendency to tear when handled by a predator (Hill and Vaca, 2004). In other words, they may have evolved to be discarded; a bit like a lizards tail?

These large forest butterflies have two large eyespots on the undersides of their hindwings (below) as well as a feature at the end of the hind-wing – the tornus – with two small black spots, that look rather like eyes. These do look a bit like a tiny head, or nose (‘snout’) which might fool predators into thinking that this is the business end?

Large, bright eyespots, have been shown to deflect the attacks of insects like mantids (preying mantises) away from the more vulnerable body parts (Prudic et al., 2015); but other experiments using birds, suggested that the deflective effect was caused by small eyespots, not large eyespots (Vallin et al., 2011). Perhaps the larger eyespots have more of a deterrent, or intimidatory effect?

The idea that butterfly eyespots are effective at deflecting attacks away from the vital parts of the body also comes from trying to understand the so-called, false-heads (above) seen on many butterflies (Wourms and Wasserman, 1985). False-heads are particularly common on lycaenid butterflies and their purpose may be to mislead would-be predators into thinking that the butterfly’s head is at the other end! To my mind, the butterfly is saying: ‘peck me here’!  There is some good experimental evidence for the false-head theory (reviewed by Humphreys and Ruxton, 2018), and it is a very intuitively satisfying explanation for this common feature. Anyone who has watched these butterflies will know that they constantly move the false tails (López-Palafox et al., 2015), as if they were trying to pretend that they were antennae!

There are also eyespots, which may be false eyes (below). Some of these eyespots are only fully apparent from the rear end (to use the technical term!).  For example, the eyespots on this White Punch butterfly, Dodona deodata (Riodinidae), look very convincing from behind. As well as being a possible deflective device, the eyespots might also be a deterrent to any predators creeping up behind the butterfly (Cordero, 2001). And who knows, the same feature could perhaps have evolved to fool one type of predator in one way, and another predator in another way! 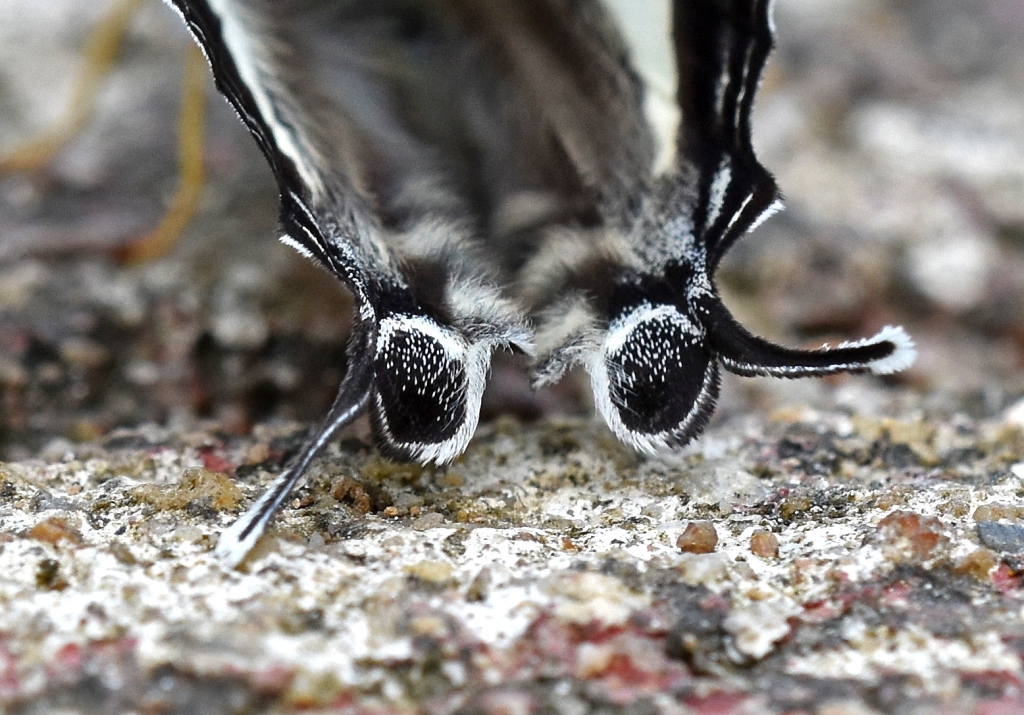 We must always remember that other animals, be they birds, reptiles and insects, see the world in a different way to us. Some of these eyespot adaptations might work in different ways under low light conditions, or even have an impact on other senses: acoustic deflection? For example, spinning hindwing tails on some moths have been shown to deflect echolocating bat attacks away from their body and towards nonessential tail appendages (Barber et al. 2015 in Humphreys, R. K., & Ruxton, G. D. (2018). And, of course, many moths have eyespots as well!

There is much to find out about the potential deflecting effect of eyespots in butterflies and moths and photographers can contribute a lot. For example, by capturing behaviour which shows the organism using its wings or false-heads in the field. Also, by capturing the very elusive events of a predatory attack – a bird pecking at an eyespot for example – which are the driving force of evolution via natural selction.

Humphreys, R. K., & Ruxton, G. D. (2018). What is known and what is not yet known about deflection of the point of a predator’s attack. Biological Journal of the Linnean Society.

Olofsson, M., Jakobsson, S., & Wiklund, C. (2013). Bird attacks on a butterfly with marginal eyespots and the role of prey concealment against the background. Biological Journal of the Linnean Society, 109(2), 290-297.

Mayhew Group
Walk in the Woods

Exploring the natural world around us

Much To Do About Writing

Art, Conservation, and the Bewildering Beauty of Nature

For every paper published in Functional Ecology, the authors write a plain language or lay summary, which explains the research (and its importance) in a generally accessible way

From buds to claws

Meeting people and wildlife during travelling adventures around the world.

Insects and insect-related events in the Manchester Museum

Be Kind to Our Last Earth

Updates on pollinators and pollinator projects from around Scotland