Tibial spurs are an ancient feature, found on most insects, from bees to moths, although in some species they have been lost or modified over evolutionary time to suit the adaptive needs of different groups. So the size and shape of this implement – rather like the blades on a Swiss army knife – is highly variable and it has been put to a wide variety of uses. They can occur on any leg, sometimes they are movable, and there may be more than one, but in many cases however, the exact function of the spurs is not known, or can only be guessed at. They are certainly found on a lot of insects which dig into the soil, like dung beetles, but are also used for a myriad other purposes, like piercing plants, cleaning antennae, walking on rough surfaces, nuptial gifts and maybe even as weapons?

Tibial spurs are common on lepidopterans and were present on the proverbial ‘ancestral leg’, the primitive condition in this group. Tibial spurs come in all shapes and sizes and their presence, absence or number are used classify moths and  butterflies. For example, the typical lepidopteran complement is 0-2-4 (i.e. one on the forelegs, two on the middle legs and four of the hindlegs); but this arrangement has been lost or modified, many times, over evolutionary time (Norberg et al., 2002).

In the Lepidoptera the most complete spur formula is 1-4-4; it occurs only in a genus of primitive moths in the family Agathiphagidae, known as kauri moths: “a dinosaur-aged lineage of moths“.

Here is a photo I took in Spain of a tiny little (c. 2 cm) Saltmarsh Grass-veneer moth (below); tibial spurs are usually 0-2-4 in pyralid moths like this. What they do with them is another question?!

Skipper butterflies also have quite prominent spurs, although they are present to some degree or other on most butterfly families. According to Adrian Hoskins: “The tibia on the forelegs of Pieridae, Hesperiidae, Papilionidae and Lycaenidae are often equipped with a flexible spur through which the antennae can be drawn for cleaning”. He also goes on to say that a tibial spur is also used as a spike by female butterflies, to puncture the cuticle of a leaf, to taste (with her feet I suspect) to see whether it is suitable for laying eggs on.

The key feature about skippers, is that their legs get more ‘spured-up’ as you move backwards! The foreleg tibia usually have no spurs, the midleg tibia sport one pair of spurs, and the hindleg have two pairs of spurs  (0-2-4). See below.

The fore tibia in skippers (and papilionids) has a movable lobe known as an epiphysis, which usually has a marginal comb of hairs and bristles, which is used to clean the antennae and proboscis.

However, I think the epiphysis is anatomically distinct from the tibial spurs. Very difficult to photograph, but you can just about make them out on this photograph of a skipper from Thailand (below). 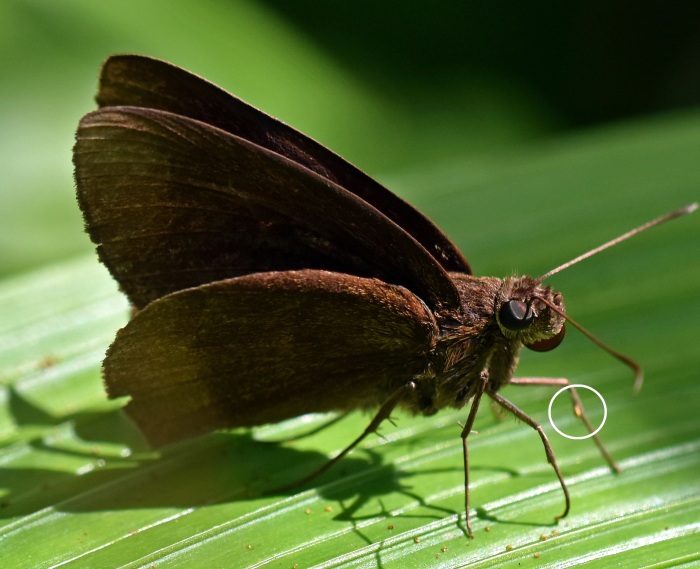 In the Lepidoptera the most complete spur formula is 1-4-4; it occurs only in a genus of primitive moths in the family Agathiphagidae, known as kauri moths: “a dinosaur-aged lineage of moths“.

Some bees, such as bumblebees and mining bees use tibial spurs to dig nests.  In fact, nearly every species of bee has two tibial spurs on each hind leg, but not honeybees (Apis mellifera), because they build wax combs and have no need to dig. In nearly all bees, the inner hind spur of both sexes is as long as or often longer than the outer spur (Crane, 1979), as can be seen in this photograph of the leg of a North American bumblebee, Bombus centralis (below) from the AskNature website.

I searched through my collection of bee photograpphs, and managed to find a couple that clearly show the tibial spurs. The first is of a Field cuckoo bumblebee (Bombus campestris), which for some reason, was holding its leg up in the air! Showing off its tibial spur perhaps?!

The second one (below) is of the tibial spurs on a white-tailed bumblebee, Bombus lucorum.

The ant Camponotus ruﬁfemur , uses microscopic ‘combs’ and ‘brushes’ to keep its antennae clean (Hackmann et al., 2015). The ants clamp one antenna tightly between a notch and a (tibial) spur, and pull it through, see video here. The ants then clean the antenna cleaner itself with their mouthparts! They really know how to look after themselves!

Another ant, Pseudoponera stigma, also has an antennal cleaner (see below) adapted from a tibial spur.. Photo from Antkey. 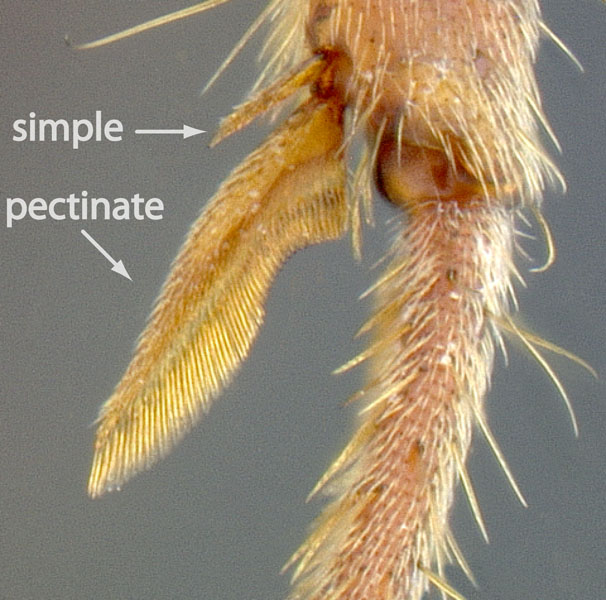 Tibial spurs on Pachycondyla stigma – tibia with two spurs – one is larger and pectinate, and the other is simple. (Antkey.org).

Dung beetles use tibial spurs (and tibial teeth) for digging and tunneling. There may be one or two spurs on the distal end of the tibia (see below). 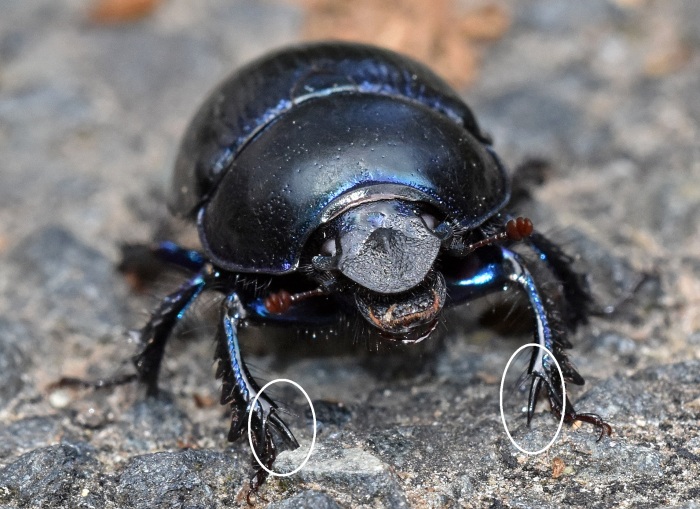 Tibial spurs are highly variable and have been used by taxonomists to classify different beetle species. Exactly how they use the spur, together with the tibial teeth, is something that would be fascinating to study! The stout, sharp, spur certainly looks like a very useful tool (maybe even a weapon in some circumstances?) to have near the end of your legs! We humans had to invent picks to help us when trying to dig into hard soil. 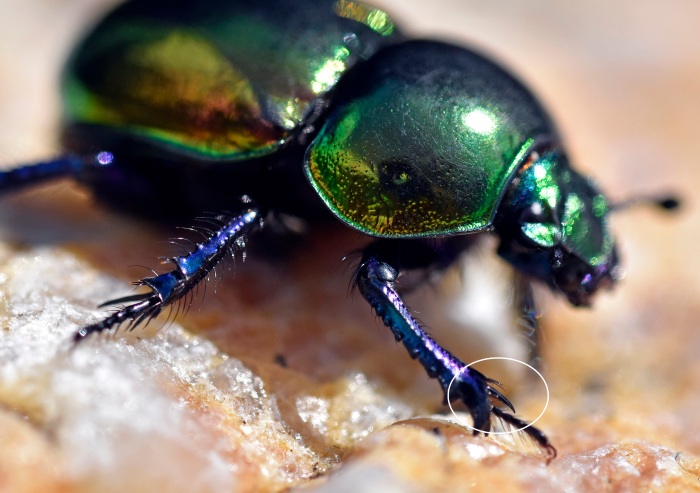 Finally, tibial spurs are also put to use in the mating game. For example, in the striped ground cricket, Allonemobius socius, from North America, the females receive a nuptial gift by chewing on a specialized tibial spur on the male’s hindleg during copulation! Well chew my leg off! Such tibial spur chewing occurs in other crickets as well. See Fedorka & Mousseau (2002).

Much more that could be written about this subject, with many other examples, but I hope I have provided a useful introduction to a topic which nicely illustrates how a morphological feature can be changed and adapted over time by evolution. The diversity of this little appendage shows how labile a structure can be under selective pressures acting to mold it to the requirements of the ecological niche the organism occupies.