Black. We all know what it is. The absence of light; the opposite of white. But are there gradations of black? Are some blacks blacker than others? The answer is most assuredly yes, and scientists have recently developed super black products with incredibly efficient light absorbing properties. For example, Vantablack – a material developed by Surrey NanoSystem in the UK – can absorb up to 99.96% of visible light. That’s very, very black! The effect is produced by carbon nanotubes; a microscopic forest of tiny cylinders. [N.B. Nanoscale refers to structures with nanometre (nm) dimensions, i.e. one billionth of a metre, or about 100,000 times smaller than a human hair.] 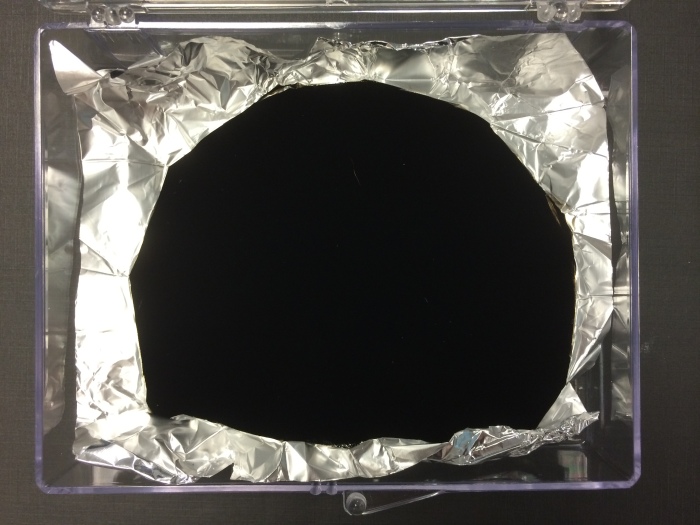 What has this got to do with butterflies, you may well ask? Well, as with many human inventions, Nature got there first! For example, so-called ‘structurally assisted blackness’ – a blackness produced by nanoarchitecture (microscopic nanostructures and patterns) on wings scales – is a common phenomenon in black butterfly wings.

Butterflies produce these ultra-black, or super black, wings and wing regions, for a variety of reasons. Firstly, of course, to warm up. The ability to thermoregulate, is enhanced by possessing highly efficient, black, solar-absorbing areas. The quality of the blackness has a direct physiological impact on the life of the butterfly. Secondly, very black areas contrast nicely with other brightly coloured, particularly iridescent, areas or patches. As dress designers will know, black borders provide a wonderful contrast (see below). Butterflies are masters of this sort of design! 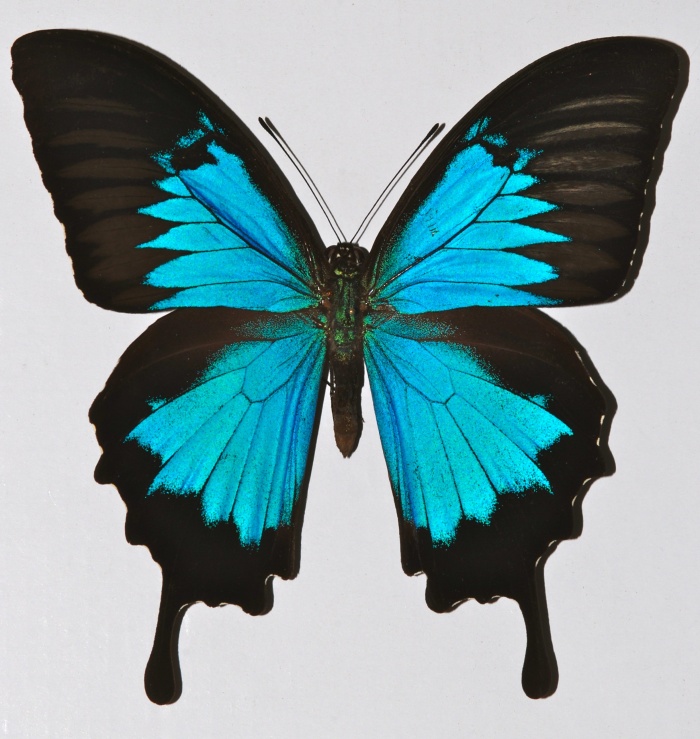 All of the ultrablack wing scales investigated to date in the family Papilionidae, have a particular structure – microscopic ridges and a honeycomb of holes – although the size and shape of the nano-holes (below) varies between species (Davis et al., 2020).

Highly contrasting wings, with prominent black patches are often found on the wings of male butterflies, such as the Goliath birdwing butterfly, Ornithoptera goliath (below), and these areas have reflectances approaching 0.2% (i.e. 99.8% of the light is absorbed), resulting from the nanostructures. The cover scales in the black wing regions of this butterfly have a nano-architecture consisting of ‘adjacent inverse V-type ridges’, which effectively reduce reflection (Zhao et al., 2011a).

V-shaped nano-architecture of the black wing scales of the Goliath butterfly. (Zhao, 2011b)

The black wings of the golden birdwing, Troides aeacus (below) have been described as natural solar collectors, and also have the same V-shaped ridges and sub-wavelength nano-holes shown above (Zhao et al., 2011a).

The fore-wings of the male Magellan birdwing, Troides magellanus, are also wonderful solar collectors, absorbing up to 98% of visible light according to Herman et al. (2011). There are quite a few superficially similar birdwing butterflies, where the males in particular have very black forewings which contrast nicely with their yellow hindwings. Indeed, butterflies may be using the ultra-black wings to increase the contrast of color signal (yellow in this case). These are of course, aposematic or warning colours, as I described in another blog on a similar butterfly: the common birdwing, Troides helena (below). The nanostructures on the wing scales in the black areas of the wings are said to enhance the solar absorption by ~ 10%.

The wings of the common rose, Pachliopta aristolochiae (below), also have a hierarchical design based on ridges and nanoholes which are said to provide both mechanical stability and efficient light harvesting. The wing scales are “pockmarked with holes” according to to Siddique et al. (2017). As well as making the wings lighter, the holes scatter the light striking them, thus enabling the butterfly to absorb more of the sun’s heat.

There are many papilionids which are superficially very similar to the common rose, such as the Great Windmill, Byasa dasarada (below), for example. Many of these papilionid butterflies with black forewings are involved in mimicry rings with other black-winged butterflies and moths, which I have described in a previous blog. 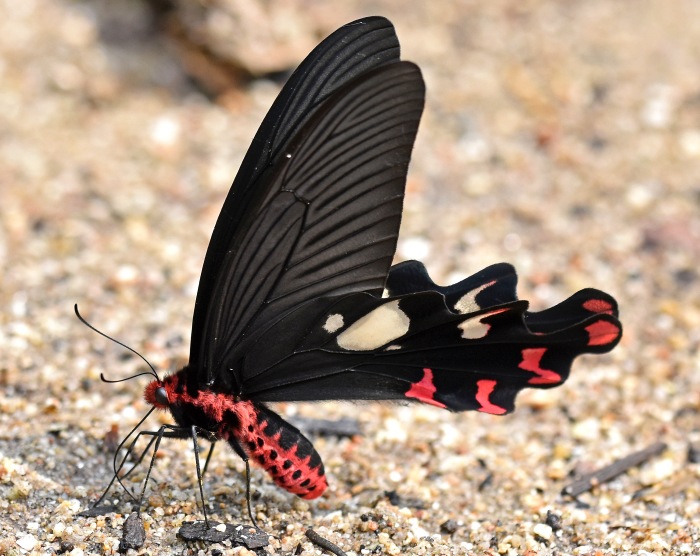 In many papilionids, the black areas also have a sprinkling of white scales (below: next two photos) which gives the wings a slightly different sheen, but probably does not affect the overall thermoregulatory function of the black areas.

The long smooth, velvet-like black strips on the wings of Rajah Brooke’s birdwing, Trogonoptera brookiana (below), are covered in tiny (c. 100 micron) overlapping black wing scales, which have super-light trapping properties. Once again, the butterfly wing scales of this species have parallel microscopic ridges with a sort of honeycomb-like structure in between (Han et al., 2012; 2013). These nano-structures mean that the butterfly wings can rapidly absorb solar heat and raise the body temperature that much quicker, which will help it survive in nature.

The black areas of the common green birdwing, or Cape York birdwing, Ornithoptera priamus (below) also have honeycombed wing scales which absorb more light than a smooth surface, enhancing the blackness of the black pigment (Zhao et al., 2011). 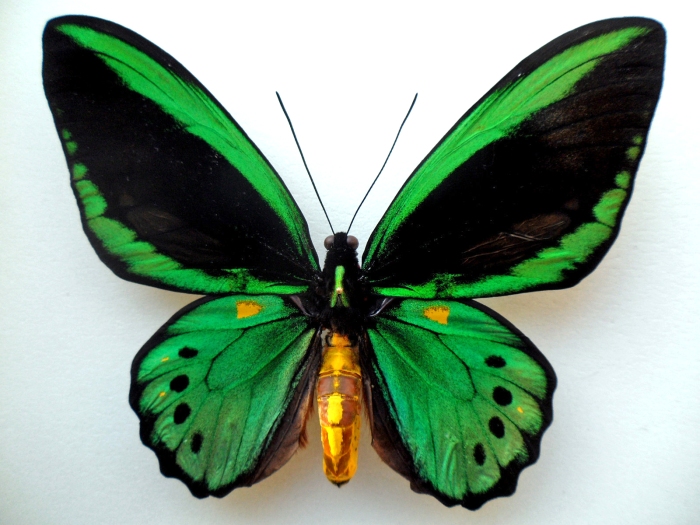 There is a lot going on on the surface of butterfly wings: colours, shapes and patterns concerned with warming up, blending in, standing out, and signalling to mates and adversaries. The evolution of microscopic structures on their wing scales has given them some distinct advantages in terms of absorbing heat and light, and has also, inadvertently provided us with beautiful colours and designs to admire!

One thought on “Butterflies with black wings”